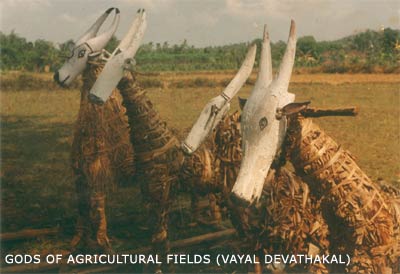 Although there have been sufficient efforts to document such community knowledge related to human healthcare, not much has been done to document the knowledge related to animal care. This wisdom which has been shaped around innumerable folk beliefs, rituals, practices and customs related to domestic animals, their care and management needs some attention lest it get vanished, since this rich repository can provide some solutions to the problems that haunt the animals husbandry sector today.

Similar to other traditional farming societies of the country, animal husbandry is inherently linked to the day-to-day life of village in Kerala. Certain unique climatic conditions and ecological features created by the Western Ghats have over the years contributed to the development of several animal friendly perspectives here. For instance look at these customs and beliefs.

Kothamooriyattam is an anusthana linked to agriculture seen among the Malaya community in North Kerala. The Irulas of Attapadi do not engage the cattle for draught power on Mondays, since they believe that Nandi, the carrier bull of Lord Siva, was born on a Monday, and the present day cattle are the descendants of Nandi.

It is generally considered auspicious to have the sight of a cow, in the morning, on the day of Vishu, a major festival of Kerala. A cow tied with a rope is generally considered auspicious in Kerala. Not only Cow, but many products obtained from it also have similar auspicious value. It is an age old practice in Kerala to wash the courtyard and porticos with cow dung slurry. Ghee and curds from two of the ingredients in Astamangalya. It is written in Gasavitri and also believed that goddess Ganga resides in gomutra while goddess Lakshmi resides in cow dung. It is also considered a healthy practice to take pancagavya, (five produce originated from cow) after an early morning bath, to clean up the stomach. Antidote plants such as Citraka and nagadanti which are used in Ayurveda are processed in cow’s urine to maintain the required purity level.

Big horns and short tails are good signs for bulls, according to the traditional animal husbandry men. Animals used for draught power should be huge with strong shoulders. The one that has two nerves (nadi) in the neck are considered strong. They are usually tied on the right side of the cart, while the weaker one is tied on the left side. Utayetukkal is a practice followed for castrating the bulls of all the breeds except chavittumoori. This is done when the calf is 6 years old. Castration is traditionally done by tying the four limbs of the calf and squeezing its testicles with two sticks. Later a mixture of manikkunthirukkam, chenninayakam, bananna stem juice and marmanikuzhambu is applied on the testicles, to be left undisturbed.

Presence of a whorl on the haunch of the cows is considered auspicious. This is believed to bring good forture to the owner of the cow.

On the contrary a crossed whorl is not considered good. Two whorls on the forehead will bring in quarrels at home. A long tail is considered good. It is believed that the cow will remain healthy up to fourteen deliveries. With regard to hooves, kuthukulambu and vattakulambu are considered good while a flat hoof is not appreciated. Horns should be thin. The space between limbs should not be close and the abdomen should not be drooping down. More hairs and oily nature of the skin are good. Thin skin, white teats/large back teats are the indications of cows yielding plenty of milk.

The indigenous knowledge of buffaloes by the Pulaya community is noteworthy. This community is spread along the coast and the midland of Kerala.

Fresh grass is always preferred as a feed for the buffaloes. It is easy to rear buffaloes in Kol fields as there is plenty of water and grass throughout the year. The cattle sheds are usually constructed using the locally available materials. The floor bed is usually made either from panambathi (palm stem) or paddy husk.

Usually boiled horse gram or sprouted gram (mulapichu) is given as a supplement feed in addition to grass and other fodder. In the month of karkitakam, both for bulls and buffalos, kozhi marunnu is given. After giving a bath, the body is smeared with sesame oil. Rice balls seasoned with sesame oil, and turmeric powder are given to promote the growth of buffalo calves. Mutton soup and rasna (Alpinia galanga) decoction are given for the cattle with weaker limbs.

To increase the milk production, black gram along with paruthikuru is ground and given. Sesame seeds are fed to increase the fat content and viscosity of milk. For bulls and cows, karuka (Cynadon dactylon) root is given as a delicacy. Similarly rice water is given in kuzhithaali for buffaloes. Groundnut cake, coconut cake and sesamum cake with wheat bran and maize grits make the favourite feed for buffaloes.

The ethno-veterinary knowledge forms a major part of the folk medical knowledge. Several region specific practices are seen among animals husbandry communities. Most of it is learned traditionally within the households.

The following details are based on the information provided by Mr. Anthoni and Mr.Lazar, two field resource persons of Centre for Folklore Studies, Thrissur.

1. Stomach Pain: Flowers of Leucas aspera (thumba), sugar candy, big red onion are made into a paste and applied fequently on the tongue. This is for developing the tongue senses. Paddy husk is sprinkled with salt water and taken in small cloth bags. These bags are warmed and used for fomentation on the stomach. A massage with the same must be given on the limbs. Animal should not be given a bath. Garlic decoction and arrowroot paste are advised. The animal would experience discomfort and would sit up intermittently. To overcome this a decoction of neem leaves, karlaka, guava leaves, salt, tea powder is given. Similarly a decoction of amari root, tulasi, neem leaves can also be given. Appakaram is given in hot water. Castor oil with hot water is given for purgation. When the animal shows a low appetite, handful of beetle leaves, and 100 gms. each of ginger, garlic, onion along with salt is given twice a day to increase the appetite.

2. Diarrhoea: Ariyaru (six seeds) along with three jeeraka in around 1200 ml of water is boiled and reduced to one forth of the volume is given with vilvadi tablet for 3 days at least twice a day.

4. Fever : No cud chewing, horripilation, temperature at the back of the ear lobes and on the lower surface of the tongue are the symptoms. Ajamoda, pepper, dry ginger and garlic are pounded and given. Neem leaves, karinjeerakam, pepper, salt, turmeric are made into a decoction along with tea powder and given. Pounded turmeric along with neem leaves is made into a paste and applied on the body. Tribulus fruits, andrographics, long pepper, dry ginger, coriander seeds, red onion, garlic together 60 grams and asafoetida are made decoction in 5 litres of water and reduced to half. This is given twice daily for 3 days. Amrutharishtam 150 ml, gorochanadi tablets 5 are given for three days twice daily.

5. Inflammation of udder: Dry ginger, yastimadhu, chenninayakam are ground with aloe juice and applied. For milch animals this can be applied with honey. The animal has to be milked frequently. Cold water can be sprinkled on the udders. A paste of Guava leaves is applied. Application of sesame oil is also good.

6. Inflammation of udder immediately after delivery: Boerhaavia (thavizhama) root and barley are made into decoction and given for 3 days twice a day.

7. Fly menace in the cattle shed: Stalks of Wild tulasi (kaattu thulasi) should be hung in the shed. The same can also be used to swat the flies. Neem oil half litre, coconut oil, camphorl karipodi, jeeraka, each 100 gms are powered and mixed and smeared on the body to keep away flies&insects.

9. Lack of cud chewing : Leaf buds of teak along with honey, onion, Leucas aspera flowers are made into paste and applied on the tongue.

10. Oozing from the ear: Stem bark of Ungu (Pongamia pinnata), cashew, neem along with turmeric are made into decoction. This is used for swabbing the ear lobes. Neem oil is warmed and mixed with camphor and is applied in the ear lobes.

12. Fracture, sprain : Manikunthirukkam and chenninaayakam, are made into paste in aloe juice and applied frequently on the injured region. If there is a fracture, this paste is applied and a bandage is done with kalassi stem bark. The animal has to remain indoors, kalassi juice is poured frequently for 21 days.

14. Rheumatic condition (vata): There are many types of rheumatic conditions according to the local healers. Limbs cannot be lifted under amavata. She buffaloes are easily affected by this. Pig’s ghee can be applied in the mouth to overcome this. His ghee should be heated along with turmeric powder and applied on the limbs. The animal cannot mew if affected by thondavata. Paddy husk is used for fomentation under such condition. Old grains of horse gram and satapushpa are tied in a cloth bag and dipped in hot neem oil. The hot mixture is applied.

On an auspicious day, the owner stands facing the east and gives to the buyer the rope which is tied to the animal and a fistful of grass. The buyer offers a token fee (dakshina) to the owner. The owner treats the animal with a last feed before it is handed over to the buyer.

The cattle in Kerala thus are a part of society and culture. The Kalapootu competitions, buffalo races and the temple based kala festivals that are the integral elements of Kerala’s culture draw their strength from cattle and such domestic animals. The traditional knowledge related to animal care which bloomed amidst the crop fields and the temples of Kerala needs to be documented so that the contemporary animal care requirements can be benefitted from the time-tested knowledge.